In Liberia, malaria is the leading cause of attendance in outpatient departments and the number one cause of inpatient deaths. Recent household surveys show artemisinin combination therapy coverage in children under five years of age at 81 percent; intermittent preventive treatment for pregnant women uptake at 55 percent; and households with at least one ITN at 62 percent. PMI and other partners are providing technical and financial support to reduce malaria burden in Liberia. The Liberian Ministry of Health’s Joint Annual Health Sector Review Report of 2016 indicated that malaria services were mostly available and provided by 97 percent of the health facilities across the country.

In Liberia, The U.S President’s Malaria Initiative (PMI) implemented the Africa Indoor Residual Spraying (AIRS) project to control malaria from 2009 to 2013. Insecticide resistance monitoring during this time indicated that Anopheles gambiae s.l., the major vector of malaria in Liberia, is resistant to the pyrethroid class of insecticides. In 2013, after presenting empirical evidence on vector resistance to pyrethroids and evidence of susceptibility to pirimiphos-methyl, the National Malaria Control Program (NMCP) and IRS Task Force switched from using pyrethroids to pirimiphos-methyl for IRS in 2013. This was the final year in which IRS was implemented in Liberia.

After the withdrawal of IRS in 2014, PMI and NMCP continued entomological monitoring to generate data on vector bionomics including species composition, distribution, and behavior. In addition, a container insectary was established on the NMCP compound for rearing Anopheles gambiae for insecticide susceptibility tests and to perform morphological species identification of field-collected mosquitoes.

Following the end of the PMI AIRS project, entomological monitoring activities transitioned to the PMI VectorLink Project in 2017 with routine monitoring being conducted in three sites – Frank Town (Montserrado County), a peri-urban area; Tomato Camp (Bong County), a rural highland area; and Jeneta (Margibi County), a rural zone. To better understand the dynamics of malaria vectors in areas outside the sentinel sites, VectorLink also began sampling mosquitoes in 10 sites along a transect from Yekepa, Nimba County in the North to Careysburg, Montserrado County, in the South. Mosquitoes were collected in May 2017, October 2017, and May 2018. The final collection planned initially for October 2018 will not be implemented following the decision to expand the number of fixed sentinel sites.

PMI VectorLink has worked in close collaboration with the NMCP and Liberian Institute of Biomedical Research (LIBR) to build local capacity for laboratory analysis of mosquito samples. Currently, laboratory analyses are being conducted by NMCP and LIBR staff at LIBR facilities. Following training in 2018, staff began conducting enzyme-linked immunosorbent assays (ELISAs) to determine sporozoite infection rates among mosquitoes collected in 2015 and beyond. 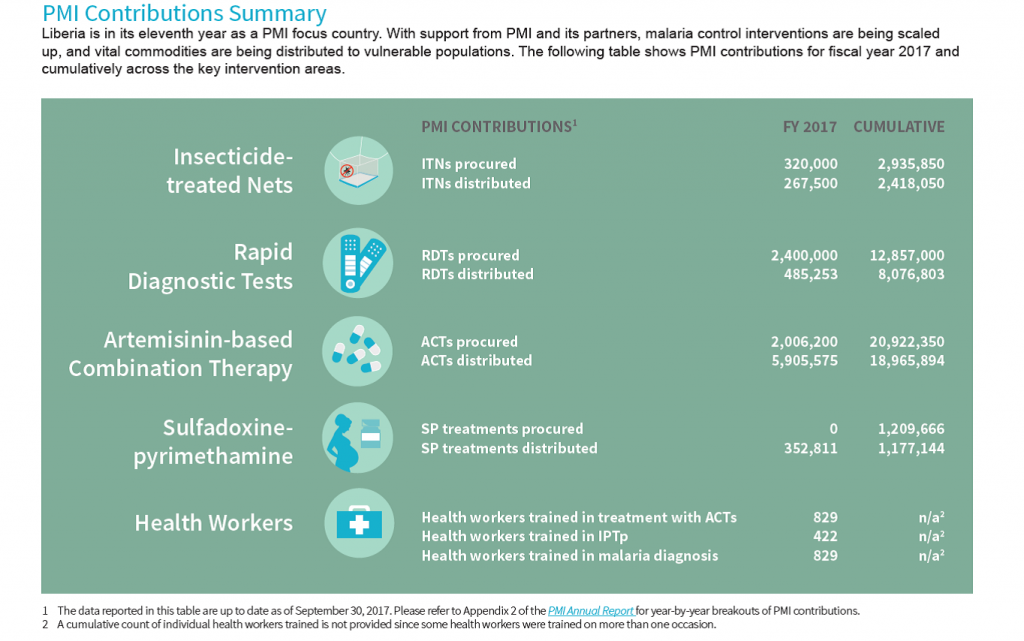